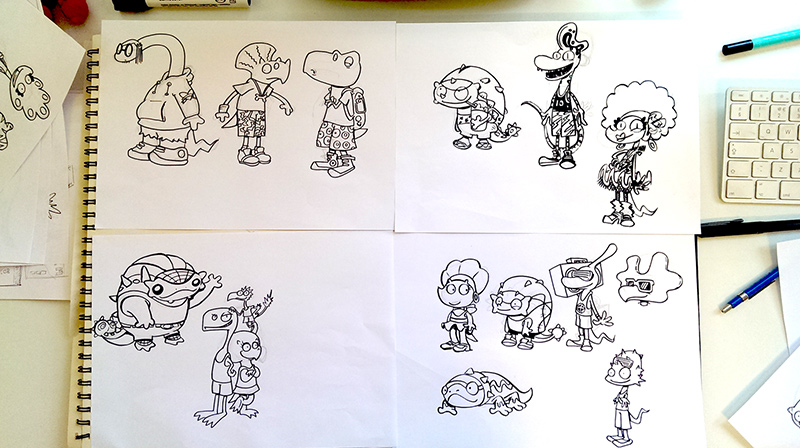 This summer we revealed details about the app we’ve been working on. If you missed our post then you can still read it here.

We’ll be posting regular updates on the app here so you get an idea of how the it’s developing – sharing challenges, inspiration and helpful tips. In this post we’re going to go through the concept behind our app and what’s inspiring us right now.

The app’s Idea
Having a good idea for an app is important, but not the only thing that matters. In fact, the idea for the app has evolved a lot from our original concept. Initially we wanted to create an educational app for kids based around dinosaurs (teaching them basic information about them). We soon realised that there are loads of apps covering very similar topics,  LOADS, especially in the under 6 year old market.

If you’re thinking of developing an app do insightful research; research as much as you can! The kids app market is pretty saturated and you want to make sure you get your concept nailed.

After many brainstorming sessions, we decided we wanted the app to feature dinosaurs but push the focus more towards fun with an underlying educational aspect. So we changed our concept quite drastically – out went trying to teach kids about dinosaurs and history, in came dinosaur kid characters that inhabit a world familiar to kids; the family home. The dinosaur kids mission would be  to rid the house of the destructive ‘Mess Monstas’ that have possessed various objects in each room. The underlying soft learning aspect means they tidy up the house and learn how to recycle on the way 🙂

Creative Inspiration
Creatively we were inspired by Adventure Time (love their animation style), the Toca Boca apps (for clean simple playfulness and great production) and the app Nighty Night (for the simplicity of the concept).

As for the dinosaurs, they have evolved (pardon the pun) quite a lot since our early sketches…